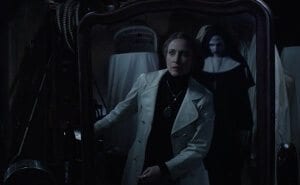 If the horror genre were a comedian, it would be Rodney Dangerfield. It gets no respect.

Horror relies on pure filmmaking to create an atmosphere of dread. Directors can fudge things and get sloppy if they’re making a comedy, or particularly an action flick, but still get away with it. But horror is unforgiving. If it’s poorly done, then we get one of the many, many, many substandard horror films that grace theaters for 15 minutes or so, then enjoy a long life unbought in a bargain bin.

The tragedy of the horror genre is that talented filmmakers are frequently ignored in favor of “safe” films. For example, as a showcase for pure filmmaking talent, which is a better overall film? The Babadook or Crash? Halloween or Driving Miss Daisy? The Conjuring or The Revenant? That’s three no-brainers right there.* Too many viewers give a pass towards what passes for important filmmaking, while true masterpieces are sneeringly looked down upon.**

I mentioned The Conjuring for a reason. James Wan’s 2013 haunted house thriller is essentially perfect. If you want to learn effective filmmaking in general, and effective horror filmmaking in particular, The Conjuring is a straight-up masterclass. Last year, Wan made the ridiculously fun Furious 7. Right now he’s working on Aquaman. In between two gigantic projects, Wan decided he needed a palate cleanser. So he made The Conjuring 2 and, while it’s not quite as impressive as the original, it’s still highly impressive.

The film opens with demonologists Ed Warren (Patrick Wilson) and Lorraine Warren (Vera Farmiga) investigating the strange events that became known as “The Amityville Horror.” Lorraine has psychic abilities, and the Warrens are conducting a seance to determine if the murders and aftermath are rooted in the supernatural. Lorraine has an out of body experience, and she visualizes the Amityville shotgun murders. To make matters even less cheerful, Lorraine is also haunted by a demon nun (Bonnie Aarons), and it implies that it’s gunning for Ed.

Across the pond in Enfield, England, things are about to get very interesting for Peggy Hodgson (Frances O’Connor) and her four kids. Her daughter Janet (Madison Wolfe) starts sleepwalking. She wakes up in the middle of the night in her living room, in front of a cracked leather chair. Soon, footsteps are heard in empty hallways. Loud knocking. Janet ultimately becomes possessed, seemingly by the spirit of Bill Wilkins (Bob Adrian), the previous occupant of the house, also previously alive.

In the world of The Conjuring, restless bugaboos aren’t content to just throw around a few books and bring down the temperature. As if inspired by an undead Trump, they’re Making Haunting Great Again by inverting crosses, flinging furniture across rooms, and repeatedly committing attempted murder. The local authorities are baffled (as they so often are), and the Warrens are sent for to determine if the Enfield Poltergeist is a hoax. Along with the supernatural shenanigans, the Warrens also must deal with Anita Gregory (Franka Potente), a skeptical investigator.

Yeah, it’s a little familiar, considering the Warrens are doing battle yet again with a fiendish thingy determined to annihilate an innocent family. But it’s not what the story is, but how the story is told that really matters. Wan’s built his very own haunted house set where he’s able to have total control over every aspect. Muted colors, looming shadows, and diabolical toys all work together to create a tangible feeling of evil. Plus, Wan’s use of the camera is highly creative. During a highly effective scene, Ed interviews the wicked Bill Wilkins through the body of Janet. The camera stays in focus on Patrick Wilson, while Madison Wolfe sitting behind him goes out of focus. As the scene goes on, you could almost swear that the shape of a young girl morphs into a malevolent codger. Is it due to CGI, or was the film’s suggestion so powerful that I just saw that?

The screenplay by Carey Hayes, Chad Hayes, James Wan and David Johnson does a lot right, but most importantly, it remembers to keep the characters likable. In many horror movies, characters are often awful, or stupid, or both, so that when their souls are swallowed, the audience cheers for their demise. But the Hodgson family is a nice, blue-collar family. They don’t deserve, at all, what’s happening to them, and we want them to be okay. Along with that, the paranormal activity is gradually ratcheted up, so that when all hell does eventually break loose, the chaos feels earned.

But this film, like its predecessor, lives and dies on the strength of the performances of Vera Farmiga and Patrick Wilson. As Lorraine and Ed, they’re totally sincere, charmingly square, and very much in love with each other. Vera Farmiga’s Lorraine is fundamentally decent, a woman who simply wants to help people, even if doing so causes harm to her. In many of his other roles, Wilson has played an ineffectual beta male. But as Ed, he’s a sweetheart who’s also a committed demon hunter. During one scene, Ed takes it upon himself to cheer up the despondent Hodgson clan. He grabs a guitar and, in a perfectly respectable Elvis drawl,  sings “Can’t Help Falling In Love.” It’s so cheesy, but Wilson takes this ridiculous moment and makes it absolutely charming. I love seeing a movie where a couple works as a team and, rather than belittling each other, they have each other’s backs. Take it from me, when you’re with the right person, you really feel like you can take on the forces of darkness and win.

To say that the Warrens have a checkered reputation is somewhat of an understatement. While some believe that they’re work was legit, others think they’re bunko artists. As far as the characters portrayed here are concerned, it’s irrelevant. They’re like the Catholic Church’s Agents of S.H.I.E.L.D., and there are many more cases and opportunities for adventures. As long as future installments continue to blend the solid character work and effective scares, I’m there.

Finally, an explanation of this review’s title. In many lesser movies, grievous bodily harm is inflicted upon unsuspecting family pets as a cheap way to show danger. It’s a lazy trope, and The Conjuring 2 wisely sidesteps it.

**The same goes for judging acting. Professional nitwit Roberto Benigni won Best Actor in 1997 for the garbage fire Life Is Beautiful. But look at the astonishing six-minute monologue delivered by Jean-Claude Van Damme in 2008’s JCVD. Van Damme is not known for his acting, but that speech he gives is better than some people’s entire careers.

Tim Brennan
Tim has been alarmingly enthusiastic about movies ever since childhood. He grew up in Boulder and, foolishly, left Colorado to study Communications in Washington State. Making matters worse, he moved to Connecticut after meeting his too-good-for-him wife. Drawn by the Rockies and a mild climate, he triumphantly returned and settled down back in Boulder County. He's written numerous screenplays, loves hiking, and embarrassed himself in front of Samuel L. Jackson. True story.
Tagged: bob adrianbonnie aaronsfrances o'connorfranka potentejames wanmadison wolfepatrick wilsonvera farmiga