Don’t Let the Sun Go Down on Me

Hearing the right song at the right moment can be life-changing. It can put the love of your life into hyper-focus, pull you back from the abyss, and give you the confidence to stand up to someone twice your size. The right song can feel like it was written just for you, yet millions of people can relate to it.

Those kinds of songs are not easy to create, much less perform in a way that feels heartfelt. Elton John has been in the business of creating precisely those kinds of songs for decades. Fine, maybe his stuff isn’t necessarily for you, but whether you like his music or not is almost irrelevant. John and his work have permeated our culture so deeply that it’s become iconic, omnipresent.

It’s not only his music, but it’s also John himself that contributed to the myth-making. The man has performed thousands of concerts in scores of countries wearing some wild-ass outfits. He’s consumed gallons of alcohol and ingested a galaxy of drugs. He’s proudly out despite having struggled with his sexuality for decades. My dude has done a lot.

That all means that, sooner or later, somebody would make an Elton John biopic. Not just because he led a technicolor life in drab, grey times, but also because movies about rock stars make frickin’ bank. Last year’s Queen biopic Bohemian Rhapsody wasn’t very good and still made over $800 million at the box office. Should we expect Rocketman, the new film about Elton John, to be a similar financial juggernaut? Probably not, but pound for pound, it’s a better film.

There’s a somewhat clever notion of introducing us to Elton John (Taron Egerton) as he storms off the stage in a spangly devil costume, marches imperiously down a hallway…and enters an AA meeting. It’s here that he’ll regale us about his life and times.* We see the sub-optimal childhood of Reginald Dwight (Kit Connor and Matthew Illesley). His father Stanley (Steven MacIntosh) is distant and seems to have close to zero interest in him. His mother Sheila (Bryce Dallas Howard) isn’t much better, and she deals with the bitterness of her life through promiscuity and sarcasm.

As much as that all sucks, young Reggie has a few things going for him. The first is that he has the ability to intuitively understand music and copy it on the piano. The second is his grandmother Ivy (Gemma Jones) who believes in him. She encourages him to apply to the Royal Academy of Music. The third is, as a young man, his meeting with budding songwriter Bernie Taupin (Jamie Bell).

Taupin’s lyrics are clever and emotional, and Reggie puts his nearly mystical ability to work in creating musical arrangements. Their partnership is fruitful. So much so that Reggie’s career starts to explode. Perhaps realizing that the masses aren’t going to rapturously chant, “WE WANT REGINALD DWIGHT,” Reggie changes his name to…drum roll…Elton John.

From there, we see Elton play his legendary show at The Troubadour in Los Angeles. Spinning headlines and glittery montages show us Elton sprinting up the charts. He earns gold records, buys lots of stuff, and descends further into drug use. Will his new manager John Reid (Richard Madden) provide him with the love and acceptance he craves? Oh, absolutely not. Can he pull himself out of the abyss in time? Obviously, he’s still alive!

I used to think that audiences would immediately see through the pandering checking of boxes in so many music biopics and respond with scorn. I’ve since learned two things. First, by and large, audiences don’t care, since they’re showing up to tap their feet along to the greatest hits. That’s why they call it a “jukebox musical,” right? Second, maybe that’s okay if the biopic in question is made with at least a bit of creativity. 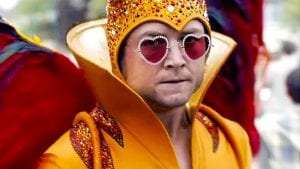 Director Dexter Fletcher had a couple of well-played opportunities recently. The first was developing a positive professional relationship with Taron Egerton in 2015’s Eddie the Eagle. The second was saving Bohemian Rhapsody after the firing of disgraced filmmaker Bryan Singer. Together, those got Fletcher the job directing Rocketman. He’s made a great-looking film filled with eye-popping costumes and lush sets. On the one hand, Dexter wisely chose to make a good chunk of the movie a musical, and the moments where the cast spontaneously breaks into song and dance are daring. Additionally, an R-rating allows Dexter to be more open about John’s life and sexuality.**

On the other hand? For every moment where an entire fairground sings “Saturday Night’s Alright for Fighting,” we have three or four moments that seem to be playing my beloved Rock Star Biopic Drinking Game. I know that, as a critic, I’m only supposed to review what’s on the screen and not pine for what could have been. But when Fletcher makes a film that lurches between a strong union of filmmaking and music, then awkwardly downshifts to a narrative that’s annoyingly predictable, I’m gonna be a little wistful for what might have been. Could you imagine a full Elton John musical? I can, and that’s a little tragic.

Speaking of music, you’ll remember that Bohemian Rhapsody concluded with Queen’s triumphant live performance at Live Aid, and that decision served to propel the audience out on a high note. Here, the film somewhat obviously ends with “I’m Still Standing.” It’s a pretty good song, but admit it — it’s not your favorite Elton John song. Rocketman needs to end powerfully, instead of merely satisfactorily. Besides, as my wife put it, “I’m Still Standing” isn’t even as good as “Benny and the Jets,” for God’s sake.

The screenplay by Lee Hall doesn’t help much. Much like Bohemian Rhapsody, Rocketman requires exactly zero heavy lifting from the audience. Over and over, the film hammers us with the point that Elton’s self-destructive tendencies come from a desire to be loved and gain approval. That’s fine, and from a psychological approach, that’s probably quite accurate. But instead of spoon-feeding the audience, why couldn’t the script display more sophistication? There’s even a scene during Elton’s AA session that’s so obnoxiously obvious, it took a certain kind of demented courage to make it in the first place. As I’ve said before, and to steal an appropriate line from Buffy the Vampire Slayer, the subtext has become text. 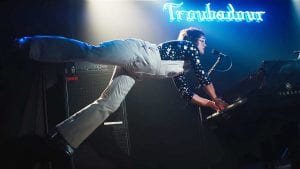 You’re probably wondering how the cast manages with such a weird fusion. For the most part, they’re solid. Let’s first talk about Bryce Dallas Howard as Sheila. Howard is a genuinely talented performer, and I’ve seen her do good work, particularly in the lovely Pete’s Dragon. I’m telling you that because she’s extremely miscast here. God knows she tries, but her dodgy English accent and distracting performance don’t do her any favors.

However, she and everyone else is overshadowed by Taron Egerton’s explosive performance. I know, Egerton doesn’t quite look like or sound like Elton John. However, he captures the essence of the man, the brassy confidence used as a shield, the temper tantrums, the moments of artistic genius. It also helps that Egerton did all of his own singing and dancing, and whether he’s pounding away at the piano or quietly walking through a party while singing, he’s magnetic.

As far as I can tell, Rocketman is going to be a success. Since fewer people than ever are physically going to the movies, I’ll take it as a good thing that a quality non-franchise film aimed at adults is doing well. Rocketman is a solidly good film, but Elton John has lived a life of gigantic peaks and valleys. He deserves a film that compliments his life.

*I desperately wanted one of the other members of the AA group to be pissed off that they didn’t get a chance to talk about their problems.

**Unsurprisingly, that artistic honesty isn’t going over well with everybody. You can read more here about Russia censoring five minutes of the movie due to “homosexual propaganda.”

Tim Brennan
Tim has been alarmingly enthusiastic about movies ever since childhood. He grew up in Boulder and, foolishly, left Colorado to study Communications in Washington State. Making matters worse, he moved to Connecticut after meeting his too-good-for-him wife. Drawn by the Rockies and a mild climate, he triumphantly returned and settled down back in Boulder County. He's written numerous screenplays, loves hiking, and embarrassed himself in front of Samuel L. Jackson. True story.
Tagged: bryce dallas howarddexter fletchergemma jonesjamie belllee hallrichard maddenrocketmansteven mackintoshtaron egerton