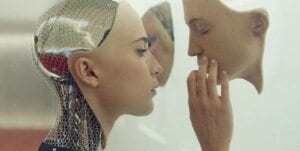 In 1923, the New York Times interviewed famed mountaineer George Mallory. When he was asked why he wanted to climb Mount Everest, he simply replied, “Because it’s there.” I suspect the same sentiment could apply to the Steve Jobs and Mark Zuckerbergs of the world, the blazingly intelligent innovators that develop technologies that shift civilization.

It’s definitely applicable to Nathan (Oscar Isaac), the reclusive supergenius behind Blue Book, an omnipresent search engine. Using his massive wealth and influence, he stages an employee lottery. Caleb (Domhnall Gleason) is the winner, and he’s helicoptered to Nathan’s home. It’s in a remote location, tucked away in a vast wilderness. Caleb will spend a week in Nathan’s home, and he’ll be introduced to Ava (Alicia Vikander).

Ava is a robot, but not just a robot. She’s the world’s first artificial intelligence, and Nathan wants Caleb to perform the Turing test on her. Computer scientist Alan Turing developed, in 1950, a test that would examine a machine’s ability to portray behavior indistinguishable from a human. It would essentially convince a machine of its own humanity. But Nathan and Caleb will soon find out that behavior doesn’t necessarily equal compliance.

Ex Machina is the directorial debut of Alex Garland. A novelist and screenwriter, he’s written the screenplays for 28 Days Later, Dredd and The Beach. If you’ve seen any of those films, you know Garland loves stories that are ruthlessly logical but have a sneaky sense of humor and subdued empathy. Here, he’s created a film that isn’t quite a thriller, but instead it’s hard science fiction that’s more interested in exploring ideas. It’s not especially fast paced, but it feels more hypnotic and the film creates a weird sense of unease. The sleek production design, detached cinematography and subtle score all work together to create a vivid and strange sense of place.

Garland is helped by a small but outstanding cast. Oscar Isaac’s Nathan is amazing, a tech genius in the body of a dudebro. When he’s not weightlifting, he’s drinking. When he’s not drinking, he’s luxuriating in entitlement. Nathan might not think of himself as a god, but he definitely looks at himself as a superhuman. It speaks volumes that in creating artificial intelligence, he placed it in the body of an adult, sexual woman, and the only other person in the house with him is the beautiful and mute Kyoko (Sonoya Mizuno), another woman that he treats as a thing. It’s a performance that’s incredible, and I wouldn’t be surprised to see him get attention at the Academy Awards.

But Domhnall Gleason definitely holds his own. As Caleb, he initially seems to be the beta male in the relationship, but we slowly learn that he’s the moral compass of the movie. He obviously looks up to Nathan, but he’ll only take being needled continuously so far.

And Alicia Vikander is outstanding as Ava. A Swedish actor, she’s been working steadily for ears, but this is the first time I’ve really noticed her. She gives us an extremely precise performance, with steady and unnerving stares, but she allows flashes of-passion? humanity?-to erupt at the right moments.

When we talk about wanting smart sci-fi, Ex Machina is the kind of film we’re talking about. Like last year’s Snowpiercer, it’s smart, gripping and overflowing with ideas. 2015 isn’t yet halfway over, but already I think it’s one of the best films of the year.

Tim Brennan
Tim has been alarmingly enthusiastic about movies ever since childhood. He grew up in Boulder and, foolishly, left Colorado to study Communications in Washington State. Making matters worse, he moved to Connecticut after meeting his too-good-for-him wife. Drawn by the Rockies and a mild climate, he triumphantly returned and settled down back in Boulder County. He's written numerous screenplays, loves hiking, and embarrassed himself in front of Samuel L. Jackson. True story.
Tagged: alex garlandalicia vikanderdomhnall gleasonex machinaoscar isaac