Home » Blog » Movies » Does Whatever A Sequel Can

Does Whatever A Sequel Can

This review will thoroughly spoil Avengers: Endgame. Proceed at your own risk.

Stan Lee used to talk about “the illusion of change.” It was a concept they used at Marvel Comics, and I imagine it’s still in use today. If you’re a comic book writer for one of the major publishers, you have a very fine line to walk. You need to make it seem as if the life of your character is changing, but have them remain essentially the same. 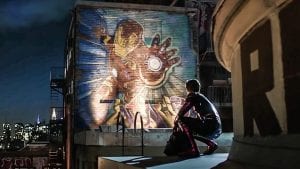 For example, Peter Parker starts off as a geeky high school kid. He has trouble dating. He never has quite enough money to do much of anything. While big-time superheroes like The Avengers enjoy fame and adulation, Peter has to deal with newspaper headlines about his costumed alter ego reading, “SPIDER-MAN: THREAT OR MENACE?”* He’d move on to college, move on to a job, yet the same problems would swirl around him. The core of Peter Parker in the comics was a good guy constantly getting crapped on by the universe when he either avoids his obligations or doesn’t balance them properly.

That’s the way superhero comics functioned traditionally. These days, film in general, and the Marvel Cinematic Universe in particular, can’t operate the same way. Audiences are by and large savvier. They expect character development in tandem with their thrills, and if they can’t get it theatrically, they only have hundreds of options to pick from through streaming services.

If you’re a cog in the vast machinery of the MCU, you have one chance to get it right. So how are you supposed to follow up an extinction level event and the deaths of some very popular characters in Avengers: Endgame? Simple — you take a vacation. Spider-Man: Far From Home is about exactly that, the idea that everyone needs a breather after big stuff happens, but the real world is always there waiting for you.

We can appreciate why Peter Parker (Tom Holland) needs a break. Just when he’s starting to get comfortable juggling his life as a high schooler with his career as a crimefighter, a shouty purple guy named Thanos arrives on Earth and poofs half of all life out of existence. This is known as The Blip, and Peter is one of those people. Five years later, he’s resurrected along with everyone else, just in time to be plunged into an apocalyptic battle. Thanos is defeated, but Peter watches his mentor Tony Stark die. Poor Pete has to acclimate himself to a world that’s moved on without him. Everywhere he goes, he sees reminders of what he’s lost.

The good news is, his school has put together a two week trip to Europe. This is a golden opportunity for Peter. He’ll have a chance to tourist up, hang with his pal Ned (Jacob Batalon), and confess his growing attraction to M.J. (Zendaya). His Aunt May (Marisa Tomei) thinks the trip is a good idea and suggests he might consider bringing along his Spider-Man duds. Just in case.

Pete isn’t feeling the jumping and thwipping while he’s on vacation and politely declines. He also politely and repeatedly declines the phone calls from super-spy Nick Fury (Samuel L. Jackson), who thinks Peter would be a dandy recruit. Why? It turns out there are reports of rampaging elemental creatures across the globe. Complicating matters is the arrival of the enigmatic Quentin Beck (Jake Gyllenhaal), also known as Mysterio. He explains that he’s from an alternate universe, one where the elementals destroyed his world. He says he’s here to help. Fury believes him, and orders Peter to assist. 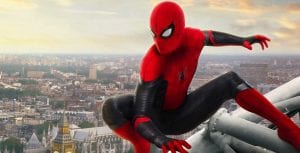 Did I also mention that Peter is bequeathed a stylish pair of glasses from Tony Stark? Code-named “EDITH,” these shades give Peter absolute control over all of Stark’s A.I. and technology. It’s keeping in character that this was a Very Bad Idea on the part of the late Stark.** Now, Peter must juggle destructive elementals, a mysterious ally, a Nick Fury who doesn’t respect personal boundaries and finding just the right moment to tell M.J. that he’s kinda crushing on her. All in a day’s work, right?

If Avengers: Endgame was a multi-course feast capping off the MCU, Spider-Man: Far From Home is the mint. Instead of sturm, drang, and bittersweet endings, this film acts as a palate cleanser. It puts a period on Phase Three of the MCU in a way that’s light and very funny. 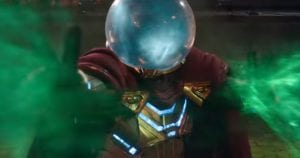 Returning from Spider-Man: Homecoming is director Jon Watts. He’s one of the best fits in the MCU, as he’s able to balance comedy, creative action, and a smidge of intrigue, all without too much of a sacrifice in terms of pacing. While Homecoming maintains a tight focus throughout, Far From Home occasionally meanders. The first half feels slightly too cutesy, but Watts never allows it to meander too much, and he’s able to nab our attention with cleverly shot action sequences. There are a couple of moments of heavy surrealism plucked directly from the comics that I adored. He’s stitched together a high-school comedy and a summer blockbuster, and everything fits cleanly. Plus, I liked that we’re not confronted with world-ending stakes again.

Writers Erik Sommers and Chris McKenna also return, and like a number of films in the MCU, they have an occasional bad habit of undercutting moments of emotion with a quip. It’s a minor annoyance, considering how strong their approach toward character is. The core of Spider-Man is the idea that with great power comes great responsibility. Go back and watch the Sam Raimi Spider-Man films, and you’ll see Tobey Maguire playing a guy either consumed with guilt or resenting his bad luck. That approach fits the character, especially during his early days. In Far From Home, Sommers and McKenna shade that concept of reacting to responsibility differently. Their Peter will immediately deal with obligations in the short-term but frequently blow them off in the long-term. Here, Peter is a little more innocent, a little more wistful, a little more like a teenager fumbling into adulthood. 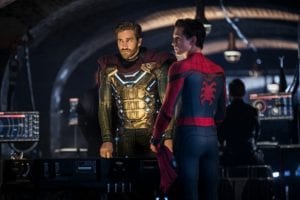 Everyone in Watts’ cast has a moment to shine. Zendaya does nice work as the deadpan M.J., using intelligence and snark as an emotional shield. As Mysterio, Jake Gyllenhaal is having a blast. He’s playing a blend of the cool uncle for the benefit of Peter, and a guy who’s a little too sure of himself. Tom Holland isn’t given a moment with the same kind of power as the one in Avengers: Infinity War, but he doesn’t need one. This isn’t that kind of movie, and his Peter is a charming and likable kid who wants to do the right thing but is cursed with being a tiny bit of a flake.

Granted, Spider-Man: Far From Home lacks the blazing creativity of last year’s Spider-Man: Into the Spider-Verse. That’s okay! Along with a couple of hugely entertaining post-credits scenes, the film cements the character of Peter Parker while pointing him in an intriguing direction for the future. It looks like there’s real change on the horizon. I can get behind that.

*I always loved how in the comics, The Daily Bugle was Fox News before Fox News.

**Before you treat that as a poorly written subplot, consider that the MCU has established a precedent in which Tony Stark impulsively has ideas that are equally brilliant and idiotic.

Tim Brennan
Tim has been alarmingly enthusiastic about movies ever since childhood. He grew up in Boulder and, foolishly, left Colorado to study Communications in Washington State. Making matters worse, he moved to Connecticut after meeting his too-good-for-him wife. Drawn by the Rockies and a mild climate, he triumphantly returned and settled down back in Boulder County. He's written numerous screenplays, loves hiking, and embarrassed himself in front of Samuel L. Jackson. True story.
Tagged: chris mckennaerik sommers. jacob batalonjake gyllenhaaljon wattsmarisa tomeisamuel l jacksonspider-man far from hometom hollandzendaya