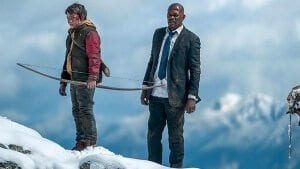 Samuel L. Jackson is one of the greatest actors ever to appear in motion pictures. Everybody knows this, and odds are, if you have a favorite movie, he’s in it. He was the soulful hitman Jules in Pulp Fiction. The tough as nails Nick Fury in the Marvel Cinematic Universe. The emerging supervillain Mr. Glass in Unbreakable. Mace Windu in the not very good Star Wars prequels. Go look at his IMDB page, and you’ll very quickly learn two things about him.

1) Jackson is an actor of astonishing talent who has worked in virtually every film genre.

2) He will appear in anything for money.

For every Fresh, there is a S.W.A.T.. For every Jackie Brown, there is a Jumper. Even when he does junk, you can never be sure if it’s good junk or bad junk. Will you come out of the enjoyably idiotic Deep Blue Sea with a smile on your face, or will you require treatment for PTSD after having The Spirit inflicted upon you? Jackson is tricky, and you can never be too careful. So it was the trap was sprung, when I caught Big Game.

Finnish actor Onni Tommila is Oskari, a boy in the early stages of manhood. There’s a tradition in his Finnish village that, on a boy’s 13th birthday*, they must venture into the forest alone for a single day and a single night. Their rite of passage is to bring whatever they catch back as proof of their manhood. Oskari’s father Tapio (Jorma Tommila, his real father) brought down a bear during his quest, so no pressure there. So off Oskari goes, armed with an ancestral bow, arrows, and an ATV loaded with supplies.

Meanwhile, upon Air Force One, U.S. President William Moore (Jackson) is hating his life. He’s a lame-duck President**who’s on the way to a conference in Helsinki. America has not clasped Moore to its bosom like some Presidents I could name, and his Secret Service agent Morris (Ray Stevenson) holds him in barely disguised contempt. Moore’s Presidential pity party is interrupted by an attack. He’s whisked into an emergency escape pod that’s unceremoniously tossed out the back.

Oskari finds the downed pod in the woods and extricates the shaken Moore. His timing is superb, since they now have a team of heavily armed killers on their tail, led by the sneering Hazar (Mehmet Kurtulus) and his team of nameless underlings. Shockingly, we discover that Morris is Hazar’s inside man. While all that is going on, the Vice President (Victor Garber) is hunkered down in a shabby looking Pentagon command center, along with the CIA Director (Felicity Huffman), the Director of The Joint Chiefs (Ted Levine, a long way from The Silence of the Lambs), and terrorism specialist Herbert (Jim Broadbent).

There’s two ways for a film like this to work. First, you get rid of everything except for the “boy must prove his manhood in an unforgiving wilderness” plot. Yes, it would be along the lines of the enjoyable Anthony Hopkins/Alec Baldwin verbose-men-trapped-in-the-woods film The Edge, but that’s not a bad thing. The second option is to go full-on bonkers and embrace the madness of the concept. Imagine a highly capable young upstart dispatching legions of terrorists and having to deal with a windbag nitwit President at the same time. That’s the film I wanted.

But, the first rule of film criticism is, review what you got, not what you wanted. I am nothing, if not somewhat professional. Big Game feels like a straight down the middle mid-90’s action flick, one where it’s yet another riff on Die Hard. There’s even a bit where Moore loses a shoe, for God’s sake.

Writer/director Jalmari Helander, a product of Finland and the director of the cult film Rare Exports, has made his English language debut here. He’s going for a 1980’s Spielberg feel here, a high-concept action flick without too much objectionable gore and swearing, just family friendly violence. Helander isn’t a bad director, and I can see him getting snatched up into the Hollywood studio machine. Even with cheap looking sets and Germany standing in as a substitute for Finland, you can see that with a better budget and tighter script, he’d be able to do something special-or at least pretty good..

It’s his script that’s the main problem here. It’s not hardcore enough to be exciting***, and it’s not ludicrous enough to be entertaining. Character motivations are dumb and obvious, Even with a murderer’s row of character actors, the material is what it is.

The real shame is that Jackson and Tommila have a prickly chemistry together, and it would have been special had it not been in a movie that sucked quite as hard. Tommila, particularly, has an feral intensity that I’d like to see unleashed. He shares the majority of his scenes with Jackson, and never backs down. For his part, Jackson is fine, and he’s got an amusing monologue about peeing his pants just before a major policy speech. But the intensity and humor he’s displayed in films like Django Unchained or Kingsman: The Secret Service is gone, probably cashing a check.

On Jackson’s IMDB page, he’s got seven projects in varying degrees of production. He’s a prolific enough actor that a misfire like Big Game won’t make a dent in his reputation. But off-screen, Jackson is known as a good guy. Seeing him stink up the joint is like hearing a beloved uncle get drunk and yell about black helicopters. You just wish he’d show a little more class is all.

*No word about what girls in the village are called upon to do on their 13 birthday. Probably keep a straight face when village boys return from the forest with a disappointing catch. “Wow, you got a…um…chipmunk. Such bravery.”

**Which is helpfully pointed out in a newspaper headline screaming, “LAME DUCK PRESIDENT.”

***A good example of a kickass action flick with a teen protagonist is Hanna.

Tim Brennan
Tim has been alarmingly enthusiastic about movies ever since childhood. He grew up in Boulder and, foolishly, left Colorado to study Communications in Washington State. Making matters worse, he moved to Connecticut after meeting his too-good-for-him wife. Drawn by the Rockies and a mild climate, he triumphantly returned and settled down back in Boulder County. He's written numerous screenplays, loves hiking, and embarrassed himself in front of Samuel L. Jackson. True story.
Tagged: felicity huffmanjalmari helanderjim broadbentonni tommilaray stevensonsamuel l jacksonted levinevictor garber