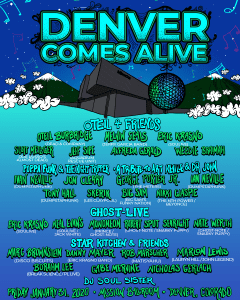 If you’ve been waiting for an excuse to check out Mission Ballroom in Denver, this is it. Live For Live Music has announced a one-day festival with an unbelievable lineup of never-before-seen supergroups.  Denver Comes Alive is the latest iteration of an innovative festival with its roots in New Orleans and the Jazz Fest community. Following in the footsteps of its predecessor, Brooklyn Comes Alive, the music marathon features unique collaborations with world class musicians.

“We are very excited that Live For Live Music is bringing the concept of Brooklyn Comes Alive to Denver at the new Mission Ballroom,” says Scott Morrill, owner of Cervantes’ Masterpiece Ballroom. “The Denver music scene is very accepting of new creative collaborations, so I feel like this concept is going to go over very well here. All the bands on Denver Comes Alive are never-been-done before collaborations, so fans will be a part of a once-in-a-lifetime experience.”
“Doing a version of BCA in Denver was a no brainer. The Denver music scene is unstoppable right now. We get some of the greatest music in the world on any given night, some of the best music venues in the nation, and an inexplicable amount of fans all over the city that support the arts,” adds Kunj Shah, founder of Live For Live Music and the visionary behind the festival.

If you feel like treating yourself, VIP tickets are available to maximize your experience. They include access to the Artists Lounge with a VIP bar, private seats in the West Balcony, and an exclusive limited-edition poster to commemorate the festival. It all goes down Friday, January 31st, at the Mission Ballroom in Denver. Doors are at 6:00 pm, and you can get tickets here (https://www.axs.com/events/388003/denver-comes-alive-tickets).

Jared Herzing
Jared is a local content contributor and aspiring author. He was fortunate enough to grow up in Golden, Colorado and graduated from MSU Denver. While an insatiable love of travel lures him all over the world, his roots remain firmly planted here. He enjoys writing short stories, poetry, children's books, societal observations, and everything else. A nature enthusiast and sunshine connoisseur, Jared is perfectly at home on any mountaintop or patio. He frequents art galleries and concerts, poetry readings and breweries, museums and bookstores. When he isn't making neighbors cringe at his musical attempts he can be found on a snowboard or sailboat, depending on the day. A perpetual adventurer and eternal patron of the road less traveled.
Tagged: CollaborationsDenver festivalsDJ Soul SisterGhost-Livejam bandsMission BallroomOteil & FriendsPoppa Funk and the Night TripperStar Kitchen & FriendsSupergroups