Coot Lake: Your Favorite New Place for an Afternoon Walk

Colorado has a lot of mountains, and sometimes you may want something a bit more relaxing than scaling the flatirons. That’s what Coot Lake is for. It’s a flat lake area that houses coots, mallards, and lots of other ducks. A lot of the lake actually acts as a wildlife preserve for wetland species, so expect to see a fair amount of ducks and birds. You may even see a Northern Harrier, which is the most threatened nesting bird species in Boulder County. It’s also a very popular gathering place for dog walkers and runners, who can be seen pacing the trails in the area. Although, if you are a dog walker, it’s a good idea to brush up on 2015’s new leash laws in Boulder. 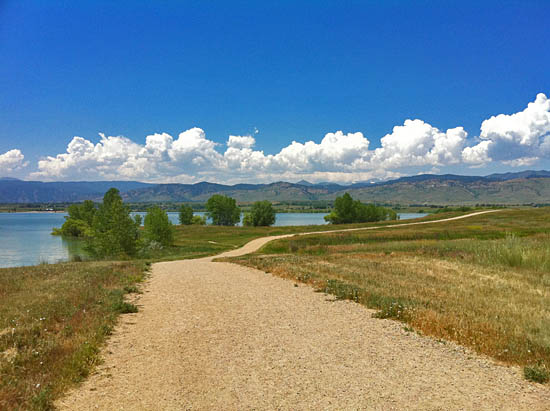 Trails from Coot lake also turn into trails that loop around the Boulder Reservoir. If you’re looking for a longer walk (or a run, perhaps), the trail that runs around the perimeter of the reservoir is probably the right path for you. It’s a fairly substantial trail, boasting a 5.25-mile length, and it’s gorgeous from start to end.

If a long hike isn’t your thing, Coot lake also offers fishing in a few designated areas, making it a beautiful location to fish. You certainly couldn’t ask for a better looking backdrop!

Coot Lake is particularly pretty in the winter, and it’s one of the few trails in Boulder County that doesn’t tend to get too icy. I’d particularly recommend the trail for viewing winter sunsets, which look absolutely spectacular from the Coot Lake area.

Coot Lake can be found off the diagonal by taking 63rd street (nearby IBM).