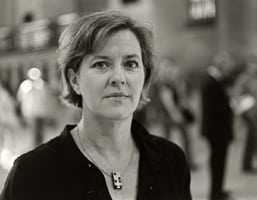 “ELIZABETH ROBINSON is the author of multiple collections of poetry, including the National Poetry Series winner, Pure Descent, and the Fence Modern Poets Prize winner, Apprehend. Her poetry has appeared in such anthologies as American Hybrid, The Norton Anthology of Postmodern American Poetry, and The Best American Poetry of 2002. She works as the homeless navigator for Boulder Municipal Court and teaches at Lighthouse Writers’ Workshop.” 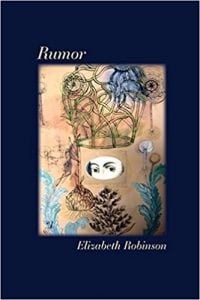 Victorian murder. The opening introduction posits the work’s jumping off point—its pressing focus, its questioning and central conflict, — “How do we create, perpetuate, absorb violence?”. And this is just a glimpse. Rumor’s unique, obscure subject matter is the egg shell from which the speaker-poet’s abstract conceptual explorations emerge.

What scared you about the first few poems you wrote which gave origin to Rumor? How long did it take for you to revisit these works and ultimately let them have their say?

When I wrote the initial poems for the book, I was going through a really difficult time, and coming out of an employment situation that was very abusive and left long-lasting damage in my life.  I was thinking a lot about why people enact damage on others—where that energy and need comes from.  It was at this juncture that I was traveling and I found the book I mention at the airport.  It was so badly written!  But it was clear that the author was writing under a sense of compulsion: she wanted to figure out who the perpetrator of the crimes was and why he committed them.  Of course there is no way for her ever to prove her hypothesis, and her frustration with that was manifest in her writing.  Also, she was talking about gendered violence and how victims become perpetrators, and all of this—though the book was written about Victorian England—seemed pertinent to both my personal situation and our cultural moment.

This gave me an opening to think and write about some of the ugliest impulses and feelings.  It seemed easier/more doable to take on a persona and distance myself from my own situation.  But I also felt that it might be instructive to try to enter into the mind of the perpetrator and (try to) inhabit it with some sympathy.  This is what was initially scary to me about writing these poems.  I voiced feelings that are anathema to me and seemed, in the poems, to be justifying anger, hatred, violence.  It was a frightening place to linger.  I probably wrote in and out of these poems for a year and then didn’t do much with the manuscript for several years.  Belladonna published a small selection of the poems in a chapbook, and my friend, the poet Craig Watson, responded very affirmatively to them, so that helped me to see that they might have a life beyond my personal exploration and dilemmas.  Still, it was several years before it was published as a book, and I feel that it was helpful to me to let some time pass so I could evaluate what this material is and what purpose it serves.

For me, all creative exploration has a relation to the spiritual—that is, it is an effort to press beyond the horizon of the known.  Rumor caused me to think more deeply about the ambiguities of violence, malice, and destruction.  As a woman, I’ve experienced violence, both physical and emotional.  I doubt that I am unlike other women in that way: we are all in a state of constant negotiation with the forms of violence and subjection that threaten us.  As a woman I’ve also been socialized to be polite and affirmative.  I think the core work of Rumor is to acknowledge that ugly and beautiful things coexist, that boundaries that we prefer to think of as discrete are actually quite permeable.  Is it ethical to try to inhabit the mind of a perpetrator with sympathy?  I thought I might learn something if I attempted that, and part of what I learned was that I had to acknowledge my own anger and how I am implicated in unintended damage that resulted in my efforts to survive.  It was disorienting to enter into such a state, and like the author of the true crime book, I entered into and left the situation that was intrinsically unresolvable.

Rumor confronts and conflates issues such as gender, power, violence, and language in order to examine and expose these concepts. How does the abstract expression of this discussion effect this ongoing dialogue?

I am fascinated by history—the stories, I guess, of how humans grapple with the contexts that constrain or enable them.  Gender, power, violence—these are ongoing social energies that shape us, though I was trying to conjure an older, foreign social milieu and—in the frame of these poems—force that historical moment to gesture toward contemporary experience.  In my writing, I often employ narrative, while trying to stretch narrative out of its tidy accustomed shape, to think more philosophically.  It’s an effort to move back and forth between the specific/historical and the abstract in order to question assumptions and create new approaches to what we think we know.

What poets influence and/or inspire you? If you could have one of these poets read your work, who would it be, and why?

This is a hard one to respond to because there are so many poets whose work I love.  I guess I tend to gravitate toward poetry that is cleanly crafted, intellectually demanding—for example poetry by Cole Swensen and Martha Ronk.  But I’ve recently been very interested in Brenda Shaughnessy’s work for its passion and, recently, Kate Greenstreet’s work for its ability to drift within the uncanny.  I’m reading Gabrielle Calvocoressi’s Rocket Fantastic with admiration for the ways that she can make various and ostensibly mismatched things speak coherently to each other within a poem.   My field of reading is always shifting, but I’m very fortunate to have a rich community of fellow poets who are friends and, of course, the poetry world is always producing wonderful new books.

How does Rumor compare to your other works, Pure Descent, and Apprehend?

I think all of my writing is, in one way or another, concerned with the ethical and the spiritual.  Pure Descent included some poems, for example, that dealt with ultimacy, including a poem about the death of a young child.  How does one make meaning out of that?   In Apprehend, I used fairy tale material extensively, partly because I realized that fairy tales are so often about people in precarious situations culling all their resources in order to make way in the world against all odds.  Survival, it turns out, can be deeply magical.  Rumor is different than the other two books in that it is more entrenched in despair.  But all three books are preoccupied to a large degree with the multiple realities that exist simultaneously within human existence, whether ugly or redemptive.  For me, poetry is consistently about tapping into presences that aren’t normally discernible and finding some way to manifest or witness to them.

Bianca Glinskas
Bianca Glinskas hails from sunny Southern California, where she studied English and Creative Writing at California State University of Long Beach.  Bianca's work has appeared in literary magazines including Knock Your Socks Off, Ordinary Madness, and Glass Mountain Magazine. Bianca's column arose as a natural attempt to answer the call of Denver's lively, pulsating literary scene. When she isn't reading or writing, Bianca enjoys doing yoga, playing viola, exploring the outdoors, drinking at breweries, and holing up in coffee shops for hours on end. For any inquiries regarding Bianca's coverage of Denver's literary scene, please do not hesitate to contact her directly at bglinskas@gmail.com.
Tagged: BiancaBiancaGlinskascoloradopoetsDenverblogsDenverCountyPoetryDenverCountyPoetsDenvereventsDenverLiteraryBlogsDenverliterarysceneDenverLocalNewsDenverpoetsElizabethRobinsonGlinskasInterviewingDenverPoetsLocalLiterarySceneLocalPoetsOnDenverPoetInterviewspoetrybyElizabethRobinsonRumor