Colorado Through the Eyes of Its Earliest Poets 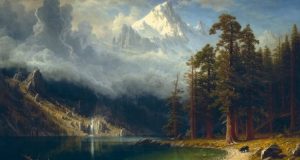 The editor of History of Colorado, Volume 1 (1918), Wilbur Fiske Stone, leaves the reader with a final thought much more qualified than I to introduce this series of early Colorado poetry: “Literature is a tremendous force in our mountain commonwealth and should be encouraged. The writer renders a valuable service. […] The poet gives us intellectual intoxication and philosophy of life.  […] Literature is an aid to culture. It fosters in us the evolve of the good, the true, the beautiful.” (890) That being said, here are some poems to help cultivate that Coloradan sense of wonder at the grandeur of nature’s majesty–that Coloradan pride, awe, and inspiration to aspire.

Walt Whitman (1819-1892) traveled to Colorado state for the first and only time in 1879 where he wrote “Spirit that Form’d this Sense.” He wrote several other poems during his westward journey, finding the very same politics which drive his poetry–ideals such as liberty and restlessness–in the land and nature, stating: “I have found the law of my own poems” (Specimen Days 210).

Spirit that form’d this scene,
These tumbled rock-piles grim and red,
These reckless heaven-ambitious peaks,
These gorges, turbulent-clear streams, this naked freshness,

These formless wild arrays, for reasons of their own,
I know thee, savage spirit–we have communed together,
Mine too such wild arrays, for reasons of their own;
Was’t charged against my chants they had forgotten art?
To fuse within themselves its rules precise and delicatesse?
The lyrist’s measur’d beat, the wrought-out temple’s
grace–column and polish’d arch forgot?
But thou that revelest here–spirit that form’d this scene,
They have remember’d thee

Hattie Homer Louthan (1866-1906) lived in Colorado in the late eighteenth and early nineteenth century, working as a staff member at the Denver Republican. She famously embarked on solo vacations across several states for her health, a trip which produced four series of letters addressing the places she visited–Wisconsin, New Orleans, New Mexico, and Colorado. A Mountain Lullaby captures the sense of healing and comfort that Louthan sought and achieved in the Rocky terrain.

A Mountain Lullaby
Over the range in the shadowy west,
Bringing you rest,
Safe in your nest,
Dream-birds come droning you here on my breast
Hush-a-bys soothing and strange.
The sun has rolled over the rim high and steep,
Star-eyes with baby are playing bo-peep,
Wide-away cares are beginning to creep
Over the range, far over the range.

Over the range in her snug silver nest,
Sinking to rest,
Low in the west,
Softly the moon, with her hands on her breast,
Joins in the songs sweet and strange.
The wind tucks the clouds round the peaks cold
and bare,
Sleepily kisses the columbine fair,
Then hurries the day with its trouble and care,
Over the range, far over the range.

Over the range, at the night-queen’s behest,
Dark-ning the crest,
Far in the west,
Old Mother Sleep, in her slumber robe dresses,
Comes, bringing Shadow and Change.
Softly they smother the sunset so bright,
Slowly the candles of heaven they light,
Sweetly they beckon the lingering night
Over the range, far over the range.

Henry Pelham Holmes Bromwell (1823-1903) was part politician, part poet. Notably, he was a vocal abolitionist, befriending Abraham Lincoln, and persistently advocated for equal rights for all persons. As a member of the Colorado Constitutional Convention Bromwell voiced his support for woman’s suffrage earning himself the reputation as the “master-builder of the Constitution of Colorado.”  He wore many hats during his life, a renaissance man of many ambitions and successes. A longer work well-worth the read, “The Song of the Wahbeek” is a work of a master. Its lyrical treatment of nature is beautifully rhymed and metered, emphasizing the very cadence of nature–the ebb and flow of life. The original work has been digitized by the Internet Archive by the Library of Congress, and is available in PDF form via this link ( https://babel.hathitrust.org/cgi/pt?id=loc.ark:/13960/t40s0930w;view=1up;seq=11 ). Here is just a taste of this feast of literary beauty:

This the tale there was of yore

Which the singer told before;
He whose words are with the echoes
Of the language heard no more
Since the earth grew old:
Those the deeds which few may dare,
Which the love-recording angels
Wrote in jeweled symbols fair
On their leaves of gold.

Agnes K. Gibbs’s “Songs of Colorado” (1916) paints a bird’s eye portrait of the state in formal verse. Familiarizing oneself with her verse reminds the modern reader that writer’s musings on nature have not changed too drastically through the eras. This piece was written in Colorado Springs in 1914:

WHEN I inhale your breath, you lovely fern;
The formal, ordered world I daily see
Vanishes, and a dell that I have known
(Shut in by willows, cool, with glooms and
damps,
Fresh, pure, with ferny odors like your own!
With vagrant sun-gleams, here and there, for
lamps)
Appears, and with the sweet credulity
Of my glad childhood, I again discern
The rainbow hues of tiniest waterfalls,
Behind whose waving gauzes, hand in hand,
Dance, to the steamlet’s tinkling madrigals,
Lithe, leaf-clad denizens of fairyland!
On russet moss nearby the feast is spread
(Sweets from the honeysuckle’s darling bell;
The buttercup’s rich offerings set around;
Carved acorn goblets, filled with hydromel;
On a white rose leaf, one ripe strawberry!)
While, from the aspen’s trembling, gold-freen
shade
A large-eyed hamadryad, violet-crowned,
And silver-robed, smiles at us lovingly!

Cy Warman (1855-1914), known as “The Poet of the Rockies,” migrated to Colorado from Illinois during the Silver Mining Boom and installment of locomotive infrastructure. He edited the Western Railway for a time until he relocated to Creede, Colorado where he founded The Creede Daily Chronicle. Apart from being an avid journalist, Warman wrote poetry principally preoccupied with Colorado’s natural beauty.

Bianca Glinskas
Bianca Glinskas hails from sunny Southern California, where she studied English and Creative Writing at California State University of Long Beach.  Bianca's work has appeared in literary magazines including Knock Your Socks Off, Ordinary Madness, and Glass Mountain Magazine. Bianca's column arose as a natural attempt to answer the call of Denver's lively, pulsating literary scene. When she isn't reading or writing, Bianca enjoys doing yoga, playing viola, exploring the outdoors, drinking at breweries, and holing up in coffee shops for hours on end. For any inquiries regarding Bianca's coverage of Denver's literary scene, please do not hesitate to contact her directly at bglinskas@gmail.com.
Tagged: coloradanpoetscoloradohistorycoloradopoetscoloradopridecoloradoprosehistoryofcoloradoOnDenverpoetryRockiesrockymountainswaltwhitmangoeswestwhitman