Alright, you’ve decided that you love snowboarding or skiing enough to invest in your own gear. Here’s a brief guide to what you need.

Set aside the majority of your budget for high quality, comfortable boots. This is the most important feature of your set up, and often overlooked. Go to a few different shops, get fitted, and make sure you’re getting the best possible pair. They’ll typically last between 100-150 days of riding, which is much longer than it sounds.

The guidelines for beginners are generally the same regardless of gender. For snowboards, you’ll want something that comes up to your chin or a few centimeters below. For skis, something between the chin and nose is best. In either case, shorter length means more control over your turns and less muscle fatigue. Don’t go too short, of course, or you’ll have handling issues. 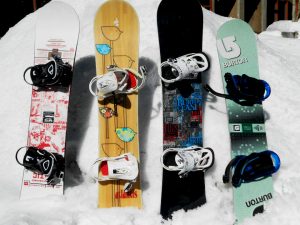 The next thing to look for is flex. Again, for men and women, skis or snowboards, stick to something on the soft-medium range for maximum control. Tip: If you’re buying used, keep in mind that older gear is stiffer and heavier than what’s made today, so go as new as you can.

Now let’s talk about width. For snowboards, your boots should hang over the board just slightly. Too far and you’ll be catching your boots in the powder and it will be difficult to balance your weight. If they don’t overhang at all, turns will be much harder. For skis, go for something slimmer in the waist for better control. Skis that are wide from tip to tail are generally for powder, which is more advanced than you’ll be dealing with.

The last thing to look for is profile shape. Beginners will want camber. Lay the board or ski flat on a table. The camber refers to the gap between the table and the middle of the board, and the shape resembles a hipster-mustache or a wave. Camber is good for beginners because it applies your weight and pressure evenly and works for all riding styles. For comparison, a rocker has an upturned curve and is better suited for spins, tricks, and powder, which you won’t have to worry about at this stage. For something that will last you through the intermediate years, get a camber-rocker hybrid.

Of course, there’s a lot to consider when buying gear. Some shops will let you rent the gear you’re interested in before you buy it, so shop around. It’s definitely worth taking your time and investing in gear you love.

Evan Meyer
Evan is a writer, filmmaker and animator from Illinois. She moved to Boulder in 2011 to study film at the University of Colorado and fell in love with the Rocky Mountains. After graduation, she moved to Austin to pursue her film career. Despite the amazing tacos, music, and people, she found herself homesick and moved back to Denver, where there are far fewer cockroaches and seasons are an everyday occurrence. She is still writing screenplays and animating her own short films, and spends the rest of her time exploring new trails, towns, restaurants, and slopes all across the state.
Tagged: recreationSkiingsnowboardingwinter sports