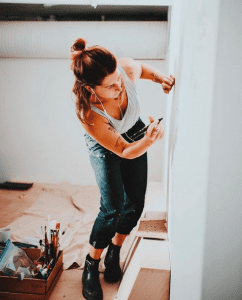 Creative powerhouse Chloé Besson is traveling the nation and branding the world with her vision. That artistic passion, however, wasn’t always apparent to the Denver based artist and photographer.

Besson had spent most of her younger years traveling and growing up between France and Chicago, IL. She and her family were all admirers of art, and specifically of film.

“They just both independently liked it as a creative outlet. My dad always shot film and showed me how to shoot really gorgeous black and white film when I was really young. My mom did a lot of alternative processes and darkroom photography when she was my age,” Besson said.

However, Besson never imagined herself as being an artist or photographer as a career until it was already happening. From Chicago, Besson went to college to study psychology but felt as if she was simply following the status quo of what comes next. After realizing her heart wasn’t in psychology, Besson took a gap year and traveled to South America where she ended up shooting with film. After the volunteer trip, she returned to Chicago and was offered a position as a photographer’s assistant. It was these hands-on experiences that made her decide to return to school to earn a bachelor’s in fine arts at the University of Colorado Boulder in 2014. 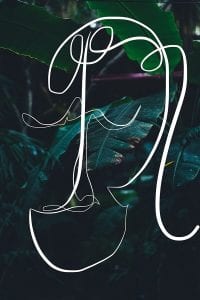 Besson had originally been contemplating the idea of returning to school to earn her MFA after graduating, but her recent recognition has morphed her timeline entirely. In the past two years, her art has started to gain public traction, and not just in Colorado. She has had solo art exhibitions, started a traveling wedding photography company with a friend, painted scattered murals throughout the west and most recently, started tattooing. All of her pieces in each medium, however, has her character woven into it. Her work, as a whole, focuses on the connection between natural landscapes, plants and humans.

“I think people are fascinating. They evoke so much. In school, I got really into the human body and skin not so much as like a vessel for life, but more a material that overlaps with butter. That like cement, all these different things and just looking at the body in this way that’s more textural and materials rather than like a living being.” Besson said.

As far as plants go, Besson returns to simply a natural attraction. An almost intuitive connection to plants makes her want to draw them, photograph them and own almost 50 of them in her apartment in Denver.

After graduating, Besson felt discouraged that her work in photography was becoming comparable to anyone with a nice phone and an editing app. She served in the restaurant industry and an art consulting firm before being able to establish a working living off of her various art mediums. She got to the level of making her own mark by drawing on her photographs. The illustrations were simple line-based designs that are now mixed into her other paintings and tattoo work. 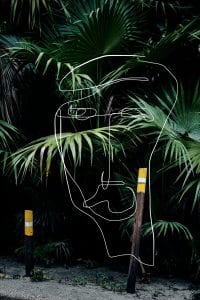 Her designs were noticed by a company in California who inquired about her doing other illustrations for one of their books, which evolved into getting invitations to do more published drawings and murals. Now she has murals featured in Bellingham, WA., Boulder, an upcoming project planned in Denver, and more.

Exhibitions, either solo or group, don’t cause Besson to get nervous now, but rather excited. It’s clear she is tremendously grateful for the support she has found in the art community, locally and beyond, but she also doesn’t stress out if people don’t approve of her work.

“For me, it’s like the more I can say without people necessarily knowing what I’m talking about, the better, because I can talk about anything I want in my life or any trauma or any reflections I have. Then viewers can experience that, but also can take away whatever they want. So I like being vulnerable, I just think it’s a really important thing for everybody to do in life,” Besson said.

This vulnerability is another element in Besson’s work which makes her pieces so striking. She plans to combine new elements in her next showcase, which will be happening at the end of her residency with the Boulder Creative Collective in Spring of 2020. She recently began the residency program after applying to get one of their studio spots in the renovated warehouse creative space. Besson believes that creating more sponsored physical space for artists is critical for creation and exhibition. Nonprofits such as the Boulder Creative Collective and RedLine Contemporary Art Center are currently providing a range of similar opportunities. 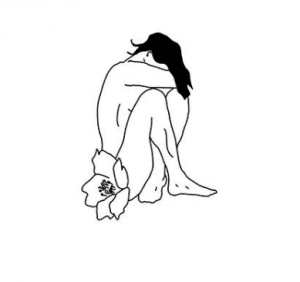 Besson believes that anyone in the Denver community looking to support local artists can help by donating to these creative spaces as well as physically showing up to openings and engaging with emerging artists that otherwise haven’t met much exposure outside of word of mouth.

Currently, Besson is putting most of her attention into her tattooing but will also, undoubtedly, continue to radiate in all of her other projects. All of her tattoo designs can be found on her Instagram page, @chloejanetattoos, and she can be reached for booking inquiries there.

To learn more about Chloe Besson and her art or upcoming projects you can reach her through her tattoo Instagram or her website: www.chloebesson.com

Helen Kuhn
Helen Kuhn is a writer hailing from the east coast. She moved to Colorado in 2015 to finish getting her Bachelor degree in English at the University of Colorado. Before making the move to Denver she interned with the Daily Camera in Boulder and with Philadelphia Weekly. She spends her times slinging drinks for work and writing poetry for fun. When she isn't writing or messing around on the keys at open mics her passion for beer has led her to finding some of the most delicious breweries around the city. She can't wait to explore more and share her love for Colorado.
Tagged: chloe besson