Can’t Sleep, Clown Will Eat Me 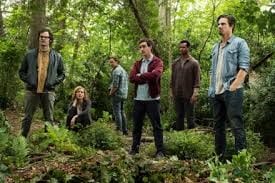 Back in the day, liking horror was viewed as nothing to be proud of. It was a genre that was grimy, unseemly, positively dripping with bad thoughts and worse intentions. If you were into the scary stuff, why, it must mean you’re some kind of dangerous freak! Speaking from experience, telling someone during the first date that one of your favorite movies is The Exorcist is an excellent way to ensure there’s no second date.

Then Stephen King came along, and it’s possible that he, moreso than anyone else in the last 40 years, dragged horror kicking and screaming into the mainstream. As of now, he’s had 58 novels published and more than 350 million copies sold. King’s work is a cottage industry, stretching throughout novels, the stage, television, comics, music*, and film.

We’ve talked before about how a film based on a Stephen King novel can be…ah…somewhat of a mixed bag. Nobody, least of all me, wants to get stuck viewing or reviewing The Mangler or The Lawnmower Man. Luckily, we’re in a bit of a renaissance of good King adaptations with Gerald’s Game and 2017’s It. Despite the onslaught of jump scares**, I really liked It, and I crossed my fingers that the second installment wouldn’t suck. My prayers were (sort of) rewarded, as It: Chapter Two is a perfectly good follow up.

If I summarize the prior film and this film, we’re gonna be here all day. If you haven’t seen It,*** all you need to know is that during the summer of 1989, an interdimensional sewer clown named Pennywise (Bill Skarsgard) slaughtered children living in Derry, Maine. You’d think the cops would get involved and roving gangs of parents would drag the clown out of a manhole and beat him within an inch of his life, but no. Instead, a group of middle-school kids calling themselves The Losers Club defeat Pennywise and vow to return to Derry if the clown ever rears his greasepaint smeared head again. 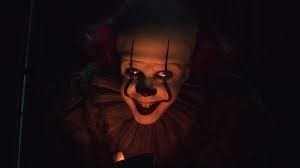 Since it would be boring as hell if ya boi Pennywise didn’t show up 27 years later, he does! After a young man is nearly killed in a hate crime, he’s definitely killed by Pennywise. As the clown doesn’t believe in subtlety, he calls out the now grown members of the Losers Club for a rematch. Some of them are less enthusiastic to return to Derry than others. They are:

So, what’s the plan to take out Pennywise? It involves The Ritual of Chud, a Native American ceremony**** Mike learned that will allegedly banish Pennywise into the outer darkness. In order to do that, the Losers Club will have to gather artifacts from their childhood. But Pennywise is watching, and he has his games… 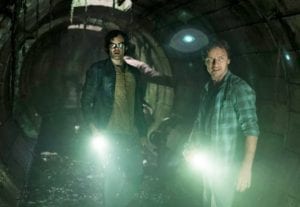 Here’s the thing about It: Chapter Two. While it’s a solid film, it doesn’t quite have the combination of nostalgia and raw elemental power of the first film. At nearly three hours, this film is long AF, and that’s an awful lot of time for jump scares and horrors lunging out of the stygian darkness. It’s a good thing that Andy Muschietti returns to the director’s chair, as he continues to display an excellent command establishing mood. A scene where Beverly returns to her childhood home is a masterclass in establishing suspense, and Muschietti gradually cranks up the tension. However, there are slightly too few moments of legit dread and slightly too many moments of things bursting into frame with loud-ass sound effects accompanying it. Having said that, the casting is strong, the film has a genuinely epic sprawl, and for every moment of dodgy CGI there’s another that feels creative and alarming.

Screenwriter Gary Dauberman was faced with the unenviable task of adapting a 1,138-page book into two films. While I applaud his effort, the end result is mixed. The best moments are when the grown Losers Club are together, and we see them bouncing off one another. Unfortunately, the moments where they have to split up to track down artifacts feel a little bit like video game levels, and some of the subplots could have been cut without harming the main narrative. Dauberman has a strong ear for dialogue, and as the parent of a middle schooler, I have to give him credit for authenticity—particularly the scenes with the kids. Put two or more seventh-graders together and you’ll get a torrent of filth that would make Quentin Tarantino proud. I liked that, as kids that age are still trying to figure out profanity and naturally overuse it to hilarious effect. 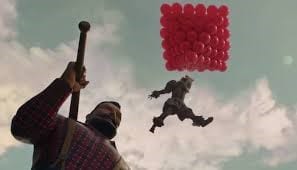 There are no weak links in the cast, but there are a couple of standouts. Old pros like Jessica Chastain and James McAvoy do good work, and they feel like natural extensions of the kids playing the younger roles. In 2017, I mentioned that instead of trying to be frightening, Bill Skarsgard’s Pennywise simply is frightening. His time working with a contortionist and perfecting bizarre vocal tics makes his sewer clown a horror icon on the same level as Freddy or Leatherface. Having said all that, you can almost hear Bill Hader saying, “Yoink!” as he nimbly steals the movie. As Richie, he’s an incorrigible wiseass who alternately uses humor as a shield and a sword. Hader does some heavy emotional lifting and isn’t just QuipBot 3000. While we don’t really have a star system any longer, this is the role that pushes Hader into the big time.

With It: Chapter Two, Warner Brothers have put their money where their mouths are. We’ve got a talented writer and director, a reasonable budget, and limited interference from timid executives. The end result isn’t “elevated horror.” Rather, it’s a prestige film with the full muscle of a major studio behind it that also happens to be a horror movie. The film shows us how trauma endures throughout the years, how the bonds of friendship can be bent but not broken, and why trusting the word of a clown in a storm drain is a bad idea.

*In doing my research, I discovered that the band Anthrax has based a number of their songs on King’s work. I can’t explain why that’s so funny to me, but it is.

**After a while, jump scares stop being genuinely scary and are just a way for filmmakers to startle viewers. Throw in a musical sting and a quick camera movement, and you can jump scare people with a pan of lasagna.

***And if you haven’t seen It, what possible reason would you have for seeing It: Chapter Two?

****I’m so tired of Native Americans being portrayed as wise mystics. It would have been better if they had said to Mike, “So the murder clown shows up every 27 years, eh? That’s why every 26 years, we peace out to New Mexico to enjoy the sun, then return to reap the benefits of the now mysteriously low property values in Derry.”

Tim Brennan
Tim has been alarmingly enthusiastic about movies ever since childhood. He grew up in Boulder and, foolishly, left Colorado to study Communications in Washington State. Making matters worse, he moved to Connecticut after meeting his too-good-for-him wife. Drawn by the Rockies and a mild climate, he triumphantly returned and settled down back in Boulder County. He's written numerous screenplays, loves hiking, and embarrassed himself in front of Samuel L. Jackson. True story.
Tagged: andy muschiettibill haderbill skarsgardgary daubermanisaiah mustafait chapter 2james mcavoyjames ransonejay ryanjessica chastain