Big Macs Are For Closers 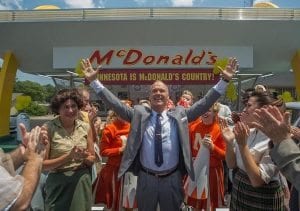 Not long ago, I read the incredible book “Strangers in their Own Land,” by the sociologist Arlie Russell Hochschild. She visited Louisiana and interviewed scads of people to ask them about their voting habits. Specifically, she wanted to find out why these decent and smart people continually voted against their own interests. If you lived in a place like Louisiana, with gorgeous wetlands and lakes you could fish in and enjoy, why would you vote for people that would lift environmental regulations and pollute them at will?

For many of them, they viewed it as a binary choice. You could either have a strong economy and good jobs, or a healthy environment. You simply couldn’t have both. Putting aside the paradox of this for a moment, that general worldview is one that’s been around for a long time in America. We excuse lying, backstabbing, all manner of underhanded tactics and atrocities, all in the name of Progress. Whatever the hell that is.

That’s one of the primary characteristics of America. By and large, we embrace change, and we do an awfully good job of excusing some of the negative aspects of change. Ray Kroc understood a little something about that. To hear him tell it, the idea of McDonald’s and the invention of fast food sprang out of his head fully formed, like Athena leaping out of the skull of Zeus. It wasn’t quite like that, as we learn in the kinda-okay film about him, The Founder.

We meet Ray Kroc (Michael Keaton) in the 1950’s. He’s a traveling salesman of milkshake mixers, and when we first see him, he’s staring right at us reciting his sales spiel. Problem is, he’s not very good at it. He tries over and over to make just one lousy sale from disinterested owners of drive-ins. Ray listens obsessively to motivational records in sad motel rooms and occasionally goes home to his wife, Ethel (Laura Dern). I’m not sure he loves her, but he sure loves her pep talks.

Then, opportunity hammers on his door. Ray gets an order for an astonishing 8 mixers, from a restaurant in San Bernardino. Why would anyone want that many mixers? So, in one of the many, many scenes of Ray driving purposefully through a sun-dappled American landscape, he decides to investigate. He pulls up to McDonald’s,* and his mind is officially blown. The place only serves 5 items:

It’s owned by brothers Dick McDonald (Nick Offerman, looking bizarre without his mustache) and Mac McDonald (John Carroll Lynch). The brothers are visionaries and in a sequence that’s alternately charming and disturbing, we see them devise the inner workings of what would become the modern fast food joint. The name of the game is efficiency and the McDonald Bros. have created a way for a customer to receive their food in 30 seconds. Sure, it’s fast food, but there’s still a focus on quality.

Dick is content with one profitable burger joint. He and his brother previously tried and failed to expand, and the stress nearly killed Mac. But Ray is also a visionary, of a sort. His head swims with McDonald’s franchises dotting the American landscape. He also recognizes that laying the groundwork for expansion is a skill set he possesses that the brothers do not. They enter into an uneasy partnership, and from there we see the rise of an empire of crappy food and Ray’s transformation into a…wait for it…burger king.

A movie about the creation of McDonald’s, that’s a good idea, since there are a few different approaches you can take. You could treat it as an American success story, a plucky go-getter becoming a success at the age of 52 due to brute persistence. You could also treat it as a cautionary tale about unrestrained capitalism, and a man achieving success while losing his soul. Either of those would be interesting, but both concepts mixed together gives us a film that’s wishy-washy at best.

The main problem is that the writer and director are not a good fit for each other. At all. Screenwriter Robert Siegel was the editor-in-chief of The Onion, and he wrote the excellent The Wrestler and wrote/directed the equally excellent Big Fan. He excels at characters who fear they’ve blown it, and want one last shot at success and redemption. He writes Kroc as a guy who’s washed up, a little reminiscent of Jack Lemmon’s desperate salesman in Glengarry Glen Ross. Kroc believes in the transformative power of capitalism with the fervor of a revival preacher.  He’s not consciously evil, but he fully defines himself by his business, and there’s a great chasm within himself that he cannot fill. If people get stepped on along the way, that’s just how the game is played.

But then you have director John Lee Hancock. He’s made The Blind Side, The Alamo, and The Rookie.** Hancock loves stories about American persistence, whether it’s about the refusal to surrender at the Alamo or a high school teacher taking a shot at becoming a big-league baseball player. He loves people who don’t give up, and he wants to chronicle how life kept kicking them in the nuts, yet they keep going. You can feel that he wants to love Ray Kroc. But when Ray abandons his wife or screws over the McDonald brothers repeatedly, the film isn’t quite strong enough to either condemn him or excuse his behavior in the name of transforming America.

The film also has a whiff of Oscar bait, and if you’re going to make an unapologetic star vehicle designed to win awards, you could do a lot worse than putting Michael Keaton in the center of it. Take a moment to go look at his filmography, and you’ll come away astonished by his versatility. He’s played a principled newspaper editor, an undead snowman, and a washed-up movie star. Homeboy played Batman and a Ken doll! As Ray, Keaton leans into the fast-talking huckster persona he’s played a few times. He’s all charisma, all big smiles, and firm handshakes. But he lets us see inside the sunny disposition to the desperate wealth addict under the surface. Keaton is always great, even in junk like the Robocop remake. Here, he’s no different.

If there’s any reason at all to see this movie, it’s for the incredible supporting performances from Nick Offerman and John Carroll Lynch. Most of you probably know John Carroll Lynch*** from his supremely disturbing performance as Arthur Leigh Allen in Zodiac. As frightening as Lynch was there, as Mac he’s sunny, warm, and utterly likable. Mac is the ultimate example of midwestern decency, the kind of guy who would cheerfully help change a tire in the middle of a blizzard. As his brother Dick, Nick Offerman plays a man with a backbone of steel and unyielding principles, similar to his beloved Ron Swanson in Parks and Recreation. But Offerman tempers his taciturn demeanor with a genuine love for his brother. These two do great work, even in scenes where they just react with facial expressions. Their chemistry is real and they are supremely likable, which makes their inevitable betrayal hurt even more.

The women in this film have considerably less to do, which is an absolute crime. As Ethel, Laura Dern isn’t allowed much of a character beyond vaguely nagging Keaton. As Ray’s second wife Joan, Linda Cardellini is immediately portrayed as a true believer. Both women’s characters are sketched strictly by how they react to Ray’s success, and that really sucks.

Ultimately, Ray Kroc’s vision and persistence gave birth to over 36,000 restaurants in 118 countries and territories. It also gave birth to appallingly inedible proto-food that’s partially responsible for an epidemic of obesity. The Founder shows us how Kroc became a success, but skirts telling us the costs of that success and the end results. It wants to have its Quarter Pounder and eat it too. Is that a shame? Hey, that’s progress for you.

*I was hoping for a scene where Ray sees the first McDonald’s, and a light shines down from Heaven upon it, like in The Blues Brothers. Unfortunately, that didn’t happen.

**He also wrote A Perfect World, which is good, and Snow White and the Huntsman, which is not good.

***Lynch was also born in Boulder and raised in Denver, so it’s cool seeing a hometown boy make good.

Tim Brennan
Tim has been alarmingly enthusiastic about movies ever since childhood. He grew up in Boulder and, foolishly, left Colorado to study Communications in Washington State. Making matters worse, he moved to Connecticut after meeting his too-good-for-him wife. Drawn by the Rockies and a mild climate, he triumphantly returned and settled down back in Boulder County. He's written numerous screenplays, loves hiking, and embarrassed himself in front of Samuel L. Jackson. True story.
Tagged: john carroll lynchjohn lee hancocklaura dernlinda cardellinimichael keatonnick offermanrobert siegelthe founder