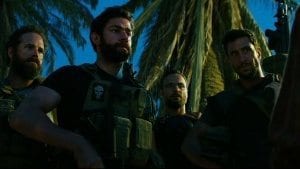 During the last couple of years, there’s been a weird trend in movies. From late December to January, we’ve been treated to a film that glorifies the heroism, cultural superiority, and all-around awesomeness of the military. These movies have a few things in common. They’re loosely based on true stories. They tend to emphasize the camaraderie between soldiers. They tend to be all about mythmaking and completely free of larger context.

In 2013,  Lone Survivor was released. It was a fairly dumb and fairly racist movie about Real Men Who Fought For What Is Right. In 2014, American Sniper was released, also dumb and racist, also about a Real Man Who Fought For Freedom.  Now, 13 Hours: The Secret Soldiers of Benghazi is upon us, directed by Michael Bay.

Here’s the weird part. Bay has made terrible movies about giant robots, a terrible movie about oil drillers in space, a pretty fun movie about evil weightlifters, and a pretty okay movie where Sean Connery and Nicolas Cage break into Alcatraz. His movies are slick and flashy, shot and edited to the point of incomprehensibility. He loves hot women, cool guys, and making fun of fat people. If, in reality, he’s a thoughtful guy, he’s done a bang-up job of concealing that characteristic in his movies. You would expect 13 Hours to be crazy and simplistic, but it’s kind of restrained and it attempts to be thoughtful.

The film is based on the book by Mitchell Zuckoff, along with the participation of five of the survivors. We meet Jack Silva (John Krasinski), an ex-Navy Seal hired to work as a contractor on a security detail for a CIA outpost in Benghazi, Libya. His buddy Tyrone “Rone” Woods leads the team and welcomes Jack into town. Perhaps “town” isn’t the right word, given that Benghazi is a barely-functioning city that’s crawling with armed militants who are antsy to get cracking on the old ultraviolence. This assignment is a bummer for Jack, given that he’s left his wife and daughters at home.* But the pay is good, better than his job back in the States as a real estate agent.

Rone introduces Jack to the rest of the security team. There’s Kris “Tanto” Paronto (Pablo Schreiber), Dave “Boon” Benton (David Denman), Mark “Oz” Geist (Max Martini), and John “Tig” Tiegan (Dominic Fumusa). All of the men have prior military experience, and they’re all sharp and tough as hell, the kind of men needed to survive in a place like Benghazi. Jack also has the displeasure of meeting Bob (David Costabile), the CIA outpost chief. Bob is an officious jerk, and he loves reminding the security team that they’re nothing more than hired muscle.

Things get interesting when Ambassador Chris Stevens (Matt Letscher) arrives and decides to stay at the nearby diplomatic compound. This isn’t ideal since the security team immediately notices that the compound offers completely inadequate protection. To make matters worse, a formerly secret meeting is publicized, letting everybody in this time-bomb of a region know that an American ambassador is in town. The CIA doesn’t listen, insisting that they’ve got the situation in hand.

Not so much, since on September 11, 2012, the compound is stormed by a heavily armed mob that’s suspiciously well-coordinated. They run wild through the place and even light it on fire to try to smoke out Stevens. The CIA site is about 1 mile away. Rone, Jack, and the rest of the security team want to leave ASAP to try for a rescue mission at the diplomatic compound. Outpost chief Bob denies permission and orders them to stand down. He repeats the order until the team decides to ignore it and mount the rescue. Upon reaching the compound and battling waves of militants, the security detail manages to rescue a few people, but they cannot find Stevens. They return to the CIA base, and the militants follow. It is there the men must defend the base from being overrun, all the while dealing with air support that never comes and a rescue team trapped in red tape in Tripoli.

13 Hours wants to be another classic of modern warfare like Black Hawk Down, a story of men battling impossible odds in a country that’s almost totally hostile to them. But there’s a big difference between the two films. Black Hawk Down provides context on why American troops were in Somalia and the numerous mistakes, misjudgments, and freakishly bad luck that lead to catastrophe. Bay’s film, however, makes a couple of big mistakes and makes them repeatedly.

First, Bay rarely gives us context. Libya effectively collapsed as a country after the death of Muammar Gaddafi, becoming a haven for Al-Qaeda and other terrorist organizations. Why? Was the American presence in Benghazi provocative to the region? Why did the embassy have inadequate security, given that it was located in one of the most dangerous places on Earth? Was there a real stand-down order? While we don’t need a full geopolitical lecture, a smart and brief history lesson would have done wonders. If The Big Short can explain the housing crisis in a concise and relatable way, Bay certainly could have done the same with the lead-up and details of the attack.

That brings us to the second big problem, which is that Bay, along with screenwriter Chuck Hogan, has made a film that’s nearly free of nuance. The men of the security team are near-perfect gods, men of unerring judgment who do no wrong. The CIA commander is a sniveling wretch constantly undermining the guys. Is the film saying that the professionals at the CIA are a bunch of idiots who can’t read conditions on the ground? We get lots of slick action, lots of badass one-liners. I want to know what these guys were really like, and how they felt about the situation. They frequently come off as typical action movie characters and considering that this is a film about real people that really died, that really pisses me off.

The film isn’t complete hot garbage, though. There are scenes humanizing the attackers, showing widows and orphans mourning their deaths. A real photo of a Libyan holding a sign saying that the attackers didn’t represent the truth of Islam. Multiple scenes of the team wondering why they’re even in Libya and not knowing who the real enemy is. There’s real tension here, and I was worried for the guys, worried violence would break out at any time. As a filmmaker, Bay is about the release. Big explosions, huge car chases. But building tension is completely different, and he does good work.

The cast is mostly good, and two performances stood out to me. As Rone, James Badge Dale is believable as a gritty special-ops type, but he brings humanity, decency, and a lot of humor to the role. Peyman Mooadi is Amahl, the local interpreter that chooses to stay with the team to help them. Yes, there’s some obvious scenes with Amahl being the bumbling newbie pointing his gun at everyone, but he becomes a real hero, an ordinary guy that puts himself in harm’s way to protect his American friends.

But as Jack, John Krasinski comes off as somewhat of a blank. His character is meant to be our entry point to this story. While Krasinski has some moments in the film that are meant to be big and emotional, he doesn’t have the same kind of warmth as the rest of the team. At one point, a character calls him “Captain America”** and Jack is meant to represent the best of America in a foreign land. Krasinski needs to be the film’s heart, and he’s too cold and removed to do that.

Bay made another film back in 2001 about a historical tragedy. Pearl Harbor was rightly viewed as simpleminded nonsense made by a director who doesn’t have the sophistication or sensitivity to juggle tragedy with commerce. The frustrating thing about 13 Hours is that you can feel Bay wanting to get serious. The guy loves and respects the military, and he wants to honor their heroism and sacrifices. The story of the attack on Benghazi and the lives and deaths of the people involved is one that is absolutely worth telling. I just wish this film was less focused on kickass mythmaking and more focused on the truth.

*You will be unsurprised to learn that Jack’s wife is a nag who just wants him to come home, thereby honoring one of the oldest and lamest cliches found in movies about war.

**Krasinski was in the running to play Captain America for Marvel but narrowly lost out to Chris Evans.

Tim Brennan
Tim has been alarmingly enthusiastic about movies ever since childhood. He grew up in Boulder and, foolishly, left Colorado to study Communications in Washington State. Making matters worse, he moved to Connecticut after meeting his too-good-for-him wife. Drawn by the Rockies and a mild climate, he triumphantly returned and settled down back in Boulder County. He's written numerous screenplays, loves hiking, and embarrassed himself in front of Samuel L. Jackson. True story.
Tagged: 13 hourschuck hogandavid costabilejames badge dalejohn krasinskimax martinimichael baypablo schreiberpeyman mooadi