Home » Blog » Movies » Back To The Wizarding World

Back To The Wizarding World 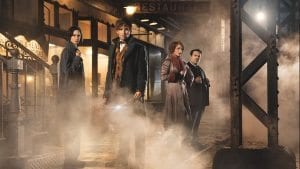 Okay, guys, confession time. Like all right-thinking people, I’ve read the Harry Potter novels and thoroughly enjoyed them. Unless you’re the constantly allergic to fun New York Times,* who wouldn’t? J.K. Rowling single-handedly created a book series that was not just fun and wondrous, but also perceptive, possessing subversive wit, and a profound understanding of the human condition. There’s no doubt that she’s one of the best writers of the last fifty years.

When her novels ignited a worldwide phenomenon, naturally plans were made to adapt the novels into films. Creative types looked forwards to realizing the Wizarding World, while studio executives envisioned sliding down massive piles of money like Scrooge McDuck. In 2001, Harry Potter and the Sorcerer’s Stone was released. I saw it, of course, and kind of hated it. Director Chris Columbus was slavishly faithful to the source material, too much so, and he squeezed all the life and spontaneity out. In 2002, Harry Potter and the Chamber of Secrets came out. I also saw it, and it also sucked for the same reasons. In 2004, Harry Potter and the Prisoner of Azkaban was released, this time directed by the wildly talented Alfonso Cuaron. It was a much better entry, but for me, the damage had already been done.

I stepped away from the franchise by then, wary of the cinematic abuse Columbus had inflicted upon me. But I was well within the minority since the Potter franchise went on to make a mind-boggling $7.8 billion worldwide. Once the series wrapped up in 2011, the studio executives smiled beatifically, secure in the knowledge that they had created quality entertainment for all ages. Sorry, I’m kidding,** they immediately starting plotting more ways to bleed the Potter franchise dry. Now we have a new franchise, the first of five films. It’s Fantastic Beasts and Where to Find Them, and it’s pretty okay. I know, that’s a ringing endorsement.

There are no Potters, Grangers, or Weasleys to be found here. The action takes place in New York City during the Roaring Twenties. We’re introduced to Newt Scamander (Eddie Redmayne), disembarking from a European steamship. Newt is a magizoologist, a field researcher of fantastic beasts, and he’s working on what will become an enormous bestseller and one of Harry Potter’s essential textbooks. He carries with him a modest suitcase which is obviously more than it seems. The Suitcase of Holding also doubles as a warehouse and mobile zoo for assorted critters. Newt is the guardian of beasties like the Niffler, a platypus-like creature obsessed with gold, a majestic Thunderbird, and a Bowtruckle, which looks like a prepubescent Groot.

Newt is a little shy, and a little bit of a klutz. He proves his klutziness when some of the beasts escape, and his briefcase is accidentally switched with a case belonging to Kowalski (Dan Fogler), a sweet cannery worker who dreams of opening a bakery. Kowalski witnesses Newt’s fantastic beasts, along with Newt using magic. Problem is, he’s a No-Maj, the American term for a Muggle, or non-magical person, and he’s legally not allowed to consort with mystical folks. Bigger problem is that said mystical folks are in hiding from regular folks for fear of persecution,*** which is where the Magical Congress of the United States of America (MACUSA) comes in. Tina (Katherine Waterston) works for them. She’s an ex-investigator and decides to find out what Newt is up to.

They’re drawn into a conspiracy involving the dark wizard Gellert Grindelwald (a cameo I won’t spoil), and shenanigans with the Second Salem Society, an anti-magic cult run by the fanatical Mary Lou (Samantha Morton). The head of MACUSA’s security, Graves (Colin Farrell), also has his own agenda, one involving Mary Lou’s psychologically abused son, Credence (Ezra Miller). Romance between wizard and no-maj is strictly forbidden, so, of course, Kowalski falls in love with Tina’s daffy and psychic sister Queenie (Alison Sudol). There’s also a mysterious destruction-cloud wreaking havoc on New York. As you can see, there’s a lot of plot here.

Remember how I’d mentioned the film is “pretty okay?” A big reason it’s not better is the fact that we have a number of plot elements that don’t fit together cleanly or elegantly. The Potter novels, for the most part, complement each other as solid fantasy, as heartbreaking coming-of-age story, and as a denunciation of people and their leaders repeatedly making terrible decisions based on fear. Add to that a host of compelling and three-dimensional characters, and you see why the Potter books achieve immortality.

However, Fantastic Beasts is a metaphor for raging intolerance, a tragedy about a boy forced to deny his true nature, and a wacky comedy about a wacky dipstick who can’t properly secure the creatures he cares for. Those elements never gel together properly and, as a result, the tone of the movie whipsaws between VFX provided silliness, genuine pathos, sweet romance, and allegedly gripping thriller.

Part of the problem is director David Yates. He helmed the final four Potter films, and he does reasonably solid work keeping many, many plates spinning at the same time. Yates also has a nice visual sense of humor. There’s a shot where Newt and Tina walk down a bustling New York street. All of the buildings, along with the costumes of the no-maj New Yorkers are drab earth tones, whereas Tina and Newt’s clothing are colorful, but in a subtle way, and they quietly pop out.

His cast does what is required, to varying degrees of effectiveness. While Eddie Redmayne is a solid professional, his Newt just ain’t that interesting. He’s a goof, but one that loves animals and wants the world to understand them. That’s cool, but is that all there is to him? Yep, pretty much. Newt shouldn’t have been the focus of this story, and I don’t love the idea of four more movies with this guy.

We might have been better off with Katherine Waterston’s Tina as the lead. Tina wants to be a solid law enforcement professional, and she’s smart, but she’s not taken seriously by her superiors. Her story shows us a different corner of the Wizarding World, but in a more thoughtful way. As Kowalski, Dan Fogler does his best, he just doesn’t get much variety in his role. Fogler mostly has to either play an invalid, or a guy who is gobsmacked by all of the magic going on around him. His hesitant and charming romance with Alison Sudol’s Queenie feels more lively. At least we have the great Ron Perlman showing up briefly as a thuggish goblin, and our boy Colin Farrell does smart and authoritative work as usual.

It kills me to say it, but the main problem here is J.K. Rowling. She wrote the screenplay for Fantastic Beasts, and you can totally believe that not only is this her first script but that the script was written by a novelist. These are two hugely different skill sets, and Rowling hasn’t fully cracked screenwriting yet. Scenes go on way too long, transitions are clunky, and characters aren’t always fleshed out economically. You can take your time with things in a 400+ page novel, but when you’re dealing with a script, you have to move like lightning. Her script has good stuff in it, very good stuff, and a ruthless edit on the script would have yielded something much stronger. I have all confidence that Rowling can become a great screenwriter if she chooses to, but this isn’t a great screenplay.

This series has enormous potential, and I wonder if we’re being set up for a look at World War II from the perspective of the Wizarding World. There’s a lot to chew on there thematically, and the possibility exists that Rowling and Yates can create something rivaling the Potter series. While Fantastic Beasts and Where to Find Them isn’t all the way a good movie, it has promise. Fogler’s Kowalski says in response to the magic he’s witnessed, “I don’t got the brains to make this up.” Rowling absolutely does, and I hope subsequent chapters soar.

*Just before the publication of the fourth Harry Potter novel, shrieks of alarm rang out from the offices of the Times. The first three of Rowling’s novels occupied slots on the New York Times Book Review, and Charles McGrath, the Book Review’s editor, declared that “The time has come that we need to clear some room.” Many publishers were upset since the Potter books were preventing new titles from appearing on the fiction list. The Times created a children’s best sellers list and hastily stashed Rowling’s work there, despite the fact that plenty of adults read her work. In 2004, after more complaints from publishers, the Times created another list, this one for children’s series books, and unceremoniously tossed the Potter novels there.

**It’s a well-known fact that only people with souls care about quality entertainment.

***Something our country absolutely excels at.

Tim Brennan
Tim has been alarmingly enthusiastic about movies ever since childhood. He grew up in Boulder and, foolishly, left Colorado to study Communications in Washington State. Making matters worse, he moved to Connecticut after meeting his too-good-for-him wife. Drawn by the Rockies and a mild climate, he triumphantly returned and settled down back in Boulder County. He's written numerous screenplays, loves hiking, and embarrassed himself in front of Samuel L. Jackson. True story.
Tagged: alison sudolcolin farrelldan foglerdavid yateseddie redmaynefantastic beasts and where to find themj.k. rowlingkatherine waterstonron perlmansamantha morton