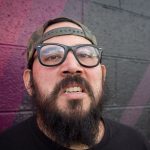 Meet Matt.  Matt is a local artist who relocated to Boulder from Austin, Texas last March after a realization sparked a wave of inspiration for his artwork. Matt grew up in Corpus Christie, Texas with two brothers considerably older than himself, which played a crucial role in Matt’s initial plunge into the world of art. Because of the age gap, Matt and his brothers didn’t always have similar interests when he was younger.  So, when his brothers were out on the football field with their friends, Matt would head to the library or arcade to get lost in the world of Todd Mcfarlane’s horror-fantasy... Read More