All Your Buried Corpses are Now Beginning to Speak 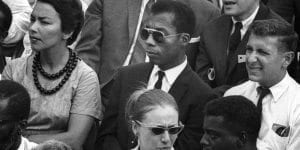 It’s entirely unsurprising that the first casualty of the Revolutionary War was a black man. That would be Crispus Attucks. There is considerable disagreement by historians about his early life, but there’s one thing everybody agrees with. During the evening of March 5, 1770, a disagreement broke out in Boston, regarding the failure of a British officer to pay a barber’s bill. Tensions were running high, and a crowd of civilians starting pelting a company of Redcoats with snowballs.

Some witnesses said that Attucks attacked a soldier with a piece of wood, while others claimed he was simply leaning on the wood and watching events unfold. Ultimately, it didn’t matter. Two bullets struck his chest and, at age 47, he died. Was he aware that he would become an icon of the abolitionist movement, or that he would join a tragic continuum of black people murdered by a white power structure? We don’t know.

What we do know is that violence visited upon black people is insidiously interwoven throughout American history. Like a poisonous snake, it winds its way through our history. Slave rebellions are brutally put down. Men, women, and children are lynched. Dogs are let loose upon protestors. A man wielding nothing more dangerous than a pack of Skittles is fatally shot by a glorified security guard. Those are the overt crimes, and we haven’t even gotten into the thousand indignities that are heaped upon the average black person during an average day in America.

Maybe that comes off as bitter. Maybe it is, and as a straight white man, my life experiences only equip me to understand certain experiences up to a point. However, Roger Ebert once wrote that “the movies are like a machine that generates empathy.” That’s true, and the right film can, for a little while, deposit you behind the eyes of someone else and let you feel what they feel. If you let it happen, that is. I had that experience watching Raoul Peck’s amazing documentary I Am Not Your Negro, an experience that was deeply upsetting and cautiously optimistic.

The film isn’t really about James Baldwin, the writer, and social critic. It’s more about him bearing witness to a specific time in our country and attempting to put it into a larger context. During the 1970’s, Baldwin was working on Remember This House; the book would never be finished. It was an examination of the lives of Martin Luther King, Jr., Medgar Evers, and Malcolm X. Baldwin was friends with all three men, or at least friendly with them. We hear voiceover from Samuel L. Jackson, reading Baldwin’s work, notes, and correspondences, and we occasionally see and hear Baldwin himself. He gives lectures and appears on Dick Cavett’s talk show. One of those moments is extraordinary, but we’ll come back to that.

Baldwin reflects on the lives and legacies of his three murdered friends. He reflects on Medgar Evers gunned down in the carport of his own home as his wife and children looked on. He reflects on King’s strident nonviolence, Malcolm X’s passionate belief in self-defense, and the fact that, shortly before their deaths, the ideologies of the two men were moving closer together.

Baldwin also comments on his perception of white America, and how white America perceives him and people like him. His words aren’t just insightful. He was one of this country’s foremost intellectuals, and he not only had a deep understanding of the arc of American history but also how that history shaped our psychology and our culpability. He wrote, “Not everything that is faced can be changed, but nothing can be changed until it is faced.” As a man who was both black and gay, and as someone who turned his back on America for a time before feeling the compulsion to return, his perspective is invaluable.

It gets better because Baldwin’s thoughts are augmented by director Raoul Peck. Peck accompanies Baldwin’s writings with news footage, clips from television and movies, and old newspaper photos. In particular is a sequence that contrasts images from a lynching with a clip from a Doris Day and Gary Cooper musical. I think the skill of a documentarian is undervalued compared to that of a “regular” filmmaker. They don’t really have the option to reshoot a sequence to achieve a better result; they have to just use the footage they have. Peck knows just the right images to use, makes just the right edits, and the end result is incredible. He’s not just skilled at assembling and editing audio and visual tracks. His pacing in the film is controlled, disciplined. Remember that pacing doesn’t just mean that the film moves quickly. Pacing is about a film moving at the correct speed for the story and the emotion behind it. Peck’s film has been nominated for an Oscar, and I deeply hope he wins.*

Let’s talk about Samuel L. Jackson for a moment. The IMDB tells us that he has 170 acting credits…so far. If you have a top 5 list of favorite movies, he’s in at least one of them. We expect certain things from Jackson. His icy intensity that occasionally explodes. His penetrating intelligence. Most of all, we expect strength. He’s Nick Fury, and he gives Captain America orders, for God’s sake! His narration here, however, is deeply sad. Mournful. It’s the tone of voice of a man who has learned, through decades of experience, a particularly hard truth that gnaws at him. Jackson’s voice sounds nothing like Baldwin’s, but it doesn’t matter. He’s able to effectively convey the emotion behind Baldwin’s words.

What would Baldwin think about modern America? About the presidencies of Obama and Trump, about Black Lives Matter, about our country’s stubborn refusal to look reality in the eye? We know because he told us already. His writings and his speeches are just as relevant in 2017 as they were in the 1960’s. But there’s a particular moment in I Am Not Your Negro that’s a little unsettling, and it’s as if the 30-years-dead writer returned to chide us.

He’s appearing on Dick Cavett’s show, and Cavett brings out philosopher Paul Weiss. Weiss, a white man, gently scolds Baldwin. He tells Baldwin that he’s making too much of race and that the two of them share a universal experience. Weiss says that the task of life is to “become a man.” Baldwin, in his natty suit and narrow tie, interrupts Weiss. He reminds Weiss that the process of becoming a man can get a black man killed. The clip is from 1968, and it’s as effective a rebuke of the All Lives Matter foolishness posted on Facebook as I’ve ever seen.

I Am Not Your Negro isn’t just a biography of an intellectual or a history lesson about resistance towards white supremacy. The film is all of that, and more, a clear-eyed examination of the ugly wound in the land of the free. Is it intense and hard to watch? Sure. Baldwin understands, and he assures us, reluctantly, that hope exists. He says, “I can’t be a pessimist because I’m alive. I’m forced to be an optimist.”

*From March of 1996 to September of 1997, Peck was also Haiti’s Minister of Culture. What I wouldn’t give to live in a country that gave a damn about culture.

Tim Brennan
Tim has been alarmingly enthusiastic about movies ever since childhood. He grew up in Boulder and, foolishly, left Colorado to study Communications in Washington State. Making matters worse, he moved to Connecticut after meeting his too-good-for-him wife. Drawn by the Rockies and a mild climate, he triumphantly returned and settled down back in Boulder County. He's written numerous screenplays, loves hiking, and embarrassed himself in front of Samuel L. Jackson. True story.
Tagged: i am not your negrojames baldwinraoul pecksamuel l jackson