A Spit Test May Diagnose Your Concussion

In 2013, the most recent year for which we have data, there were about 2.8 million traumatic brain injury-related emergency room visits, hospitalizations and deaths in the US, according to the Centers for Disease Control and Prevention. Nearly two-thirds of concussions take place in children and teens and although most patients’ symptoms disappear within two weeks, one-third of children and teens may experience prolonged symptoms of concussion. Up to 25% of kids have long-term symptoms that can last up to four months. 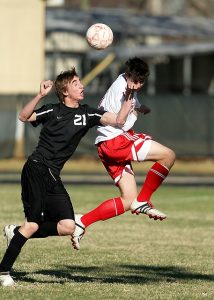 In a recent study, Penn State College of Medicine scientists found five small molecules called microRNAs in saliva with the potential for identifying concussive symptoms. MicroRNAs influence protein activities throughout the body, and they are easily measured in bodily fluids like blood, cerebrospinal fluid and saliva, according to researchers.

A concussion is a traumatic brain injury which can lead to headaches, nausea, vomiting, dizziness, vertigo and confusion among other symptoms. This new test will be able to determine which children will have longer-term symptoms. The test can also determine concussions in children who don’t have obvious symptoms.

Current assessments for concussions are subjective, relying on self-reported symptoms and observation to determine the presence and severity of a concussion. While further study is needed on the saliva test, it could provide a fast, inexpensive and effective method of assessing the extent of the brain injury.

Penn State is not the only university conducting research on the saliva test.  Researchers at George Mason University are evaluating the saliva of 12 and 13-year-old kids playing for the Jets, a team in the local youth football program in Virginia.  The George Mason researchers are comparing the preseason saliva samples to the samples from kids who suffered head injuries. They have used their research so far to apply for a grant through the Head Health Challenge, an initiative partnership of the NFL, GE, Under Armour and National Institute of Standards and Technology (NIST), one of the nation’s oldest physical science laboratories. The Head Health Challenge is dedicating up to $20 million to accelerate concussion research, diagnosis and treatment.

Researchers are hopeful that the test could come to market in a year or two, once further testing is completed.

Andrea Groth
Andrea wants to live in a world where the neighborhoods are walkable, bike lanes are plentiful, and the food is fresh, delicious and readily available. A 20-year veteran of the health and wellness industry, she started her career in the fitness industry while earning a master’s degree in Exercise Science and Health Promotion, and then on to the burgeoning field of worksite wellness. Andrea has competed in collegiate level soccer, worked as a personal trainer, fitness instructor, wellness coach, and master trainer, climbed 14ers, and completed cycling centuries and metric centuries. All of these experiences give her the opportunity to view well-being from many different perspectives. When she’s not helping others to be their healthiest self, you can find her at a farm to table restaurant, down dogging at the yoga studio, or experiencing the Colorado landscape on a bicycle, snowshoes, cross country skis or on foot.
Tagged: athleticsColoradoDenverexercisefitnesshealthnutrition